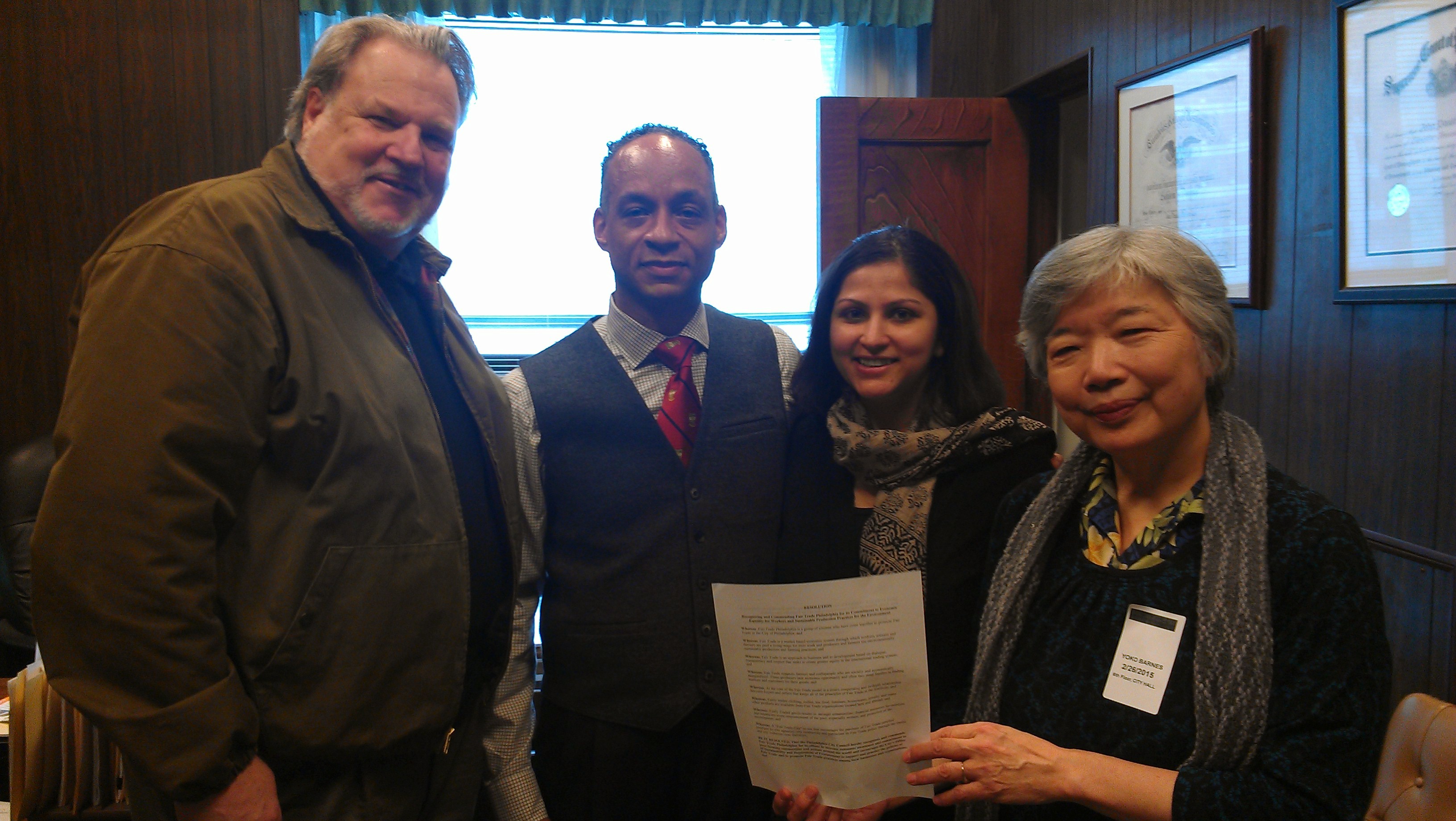 The Philadelphia City Council officially signed and passed the resolution on February 26th, 2015 recognizing and Commending Fair Trade Philadelphia for its Commitment to Economic Equality for Workers and Sustainable Production Practices for the Environment. Read the entire resolution below.

Recognizing and Commending Fair Trade Philadelphia for its Commitment to Economic Equality for Workers and Sustainable Production Practices for the Environment.

Whereas, Fair Trade is a market based economic system through which workers, artisans and farmers are paid a living wage for their work and producers and farmers use environmentally sustainable production and farming practices; and

Whereas, Fair Trade is an approach to business and to development based on dialogue, transparency and respect that seeks to create greater equity in the international trading system; and

Whereas, Fair Trade supports farmers and craftspeople who are socially and economically marginalized. These producers lack economic opportunity and often face steep hurdles in finding markets and customers for their goods; and

Whereas, At the core of the Fair Trade model is a direct, cooperative and in-depth relationship between buyers and sellers that keeps all of the principles of Fair Trade at the forefront; and

Whereas, Fairly traded clothing, coffee, tea, food, furniture, housewares, jewelry and many other products are available from Fair Trade organizations located here and abroad; and

Whereas, Fairly Traded goods results in: stronger communities; financial resources for nutrition and healthcare costs; empowerment of the poor, especially women; and protection of the environment; and

Whereas, A “Fair Trade City” is one that encourages the purchase of Fair Trade certified products by city agencies, city contractors and publicizes its Fair Trade policy through the media and city websites; now therefore,

BE IT RESOLVED, That the Philadelphia City Council hereby recognizes and commends Fair Trade Philadelphia for its efforts to increase, through Fair Trade, consumer awareness and commitment to poor farming and artisan communities around the world; and

BE IT FURTHER RESOLVED, That the Council encourages the City’s Office of Sustainability and the Department of Procurement to support and practice the policies of Fair Trade and to promote Fair Trade practices among local businesses and organizations.